My mother-in-law has been cracking me up. Everytime we talk to her about Smudge to see how he is doing and how much is he eating, she goes into a long list of wonderful things he does at Grandma's place. If you had heard her, you would think that I was threatening to take away one of her children. Okay, I already did that once when I married her daughter so I have a track record of taking away those she loves.

As for my wife, I think I kind of submarined her last weekend when I said that Smudge was probably never coming back home. She had not thought that far in advance and still thought that at some time Smudge would be coming home. I figured differently. Smudge was under a lot stress with his failing health. Also because I was not home as often, I think he felt abandoned by me. So when he went to Grandma's, Smudge took this change as an opportunity to go someplace where he felt wanted and loved. I tried to reassure him of that today, but he acted like I was a total stranger. So we told Grandma that she now has another cat. She was thrilled, and we were somewhat sad.

On that note, My Wife and I are pleased to introduce the latest member of our family: 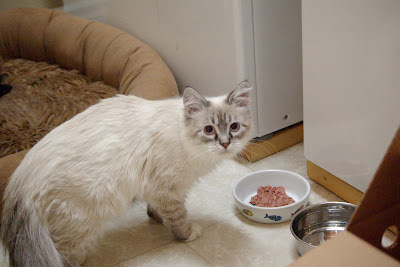 This is Baci, a five month old Lynx point Himalayan cross kitten. His name means Love and Kisses in Italian. If the name sounds familiar it is a type of chocolate as well, one that Hershey's ripped off (AKA Hershey's Kiss).