I haven't posted in a very long time.

That last time I posted was a year ago. At that time, Smudge was beginning to lose weight and was slowing down. It was not surprising given his age and his CRF.


His family is heartbroken to say that we set him free today at 2:22pm.

I wish this was a bad April Fool's Joke.


He is with his brother, Magoo and sister, Alyssa at the Rainbow Bridge.

It has been so very long since we posted.

Time measured in months, lost furriends and lost hoomins. We found ourselves only posting when one of our community passed to the Rainbow Bridge, either to wait or to go and retrieve their beloved ones for the final crossing. It was too much for Dad. Work was bad enough, but the sense of loss also started to hurt too much. But when one asks for a miracle, sometimes one is given.

Dolce has decided that she has a SUPER POWER! She has for the last four months decided that her secondary job (Primary job is detecting food and scritches) is monitoring her GIK (Grandma in KInd) diabetes. She has been 7 for 7 notifying my MIL when her blood sugar is low. I have seen her reaction myself. She will get right into my MIL face and give her the CAT STARE OF REALLY IMPORTANT STUFF. If that doesn't work, she will start her trademark yelling in Cat. The MIL has accepted that Dolce knows best. If Dolce alerts to her low blood sugar, she tests her blood and then acts accordingly. Did I mention that Dolce has been 100% accurate so far?

As for everyone else... Baci and Bella are fine. Smudge is starting to face his last battle with CRF. He is now 15 years old, which is amazing since six years ago we were given 12-24 months. Chloe is starting show her age as well. She is not in dire straights but she has lost a bit of weight.
Posted by Magoo, Smudge, Bella & Dolce at 4/03/2013 04:22:00 PM 13 comments: 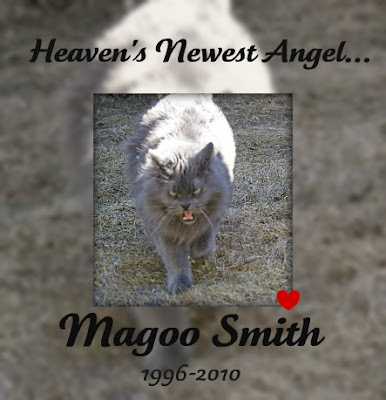 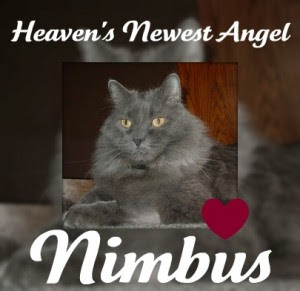 Two grey brothers from different mothers. Separated by less than a year as they departed for the Rainbow Bridge.

Dad: I read the story of Liam and his beloved companion, Theo, and I was deeply moved. We may not all agree with the reason that Liam and Theo died for, but none one can critize the love that Theo had for his master. This story is for them.


Cirrin hovered over the sleeping body of his new charge; A black and white mottled springer spaniel named Theo who slept peacefully at his master's side. Cirrin wondered why he was in such a foreign place. No one here believed in him or in his True Purpose. He felt the strong grasp on his shoulder and he looked up.

A gray winged angel also hovered nearby. Her charge laid sleeping next to the springer spaniel.

"Why are we here?" Cirrin asked.

"Someone cares about these two and is praying for them." Delphina responded. "Someone asked God to look over these two."

"But this is war." Cirrin said hopelessly. "We can't not protect Man from the hate of Man."

"Remember Cirrin," Delphina replied. "We protect until all else fails. Once they are beyond our protection, we take them home. You were given strength beyond any Seraphim to do this chosen Purpose."

"He is a strong one." Cirrin said softly as he caressed his angelic hand over Theo's head.

"He has saved many Human lives." Delphina stated as she hovered over her own charge, Liam Tasker. "He has helped this one save many others."

The sun began to crest over the horizon. The sunlight was broken into a hazy blaze of yellow and orange from the dust and heat in the air. Both the human and his companion stirred. All around them stirred other humans. Above several of the humans, other grey winged Angels hovered. Their wings were bent protectively over their charges. A forceful human voice called out to Liam and Theo. The Human named Liam rose and eagerly his companion, Theo, bounded to his side.


Liam and Theo had walked many miles together on these foreign roads. Theo's nose twitched and scented the morning air. He reward for finding the silly tools of humans was his favourite toy and a moment of pure fun and joy with his beloved human.

Suddenly Delphina's wings tensed and hardened. The crack of a human weapon echoed in the air. Delphina fell to ground next to her charge. She looked into his eyes as he left his earthly existence. She placed her angelic hand on his heart.

"Liam." Delphina solemnly recited her ancient oath. "I am your Guardian Angel. I am to protect until all Hope fails. Then I am here to take you home."

Cirrin hovered over Theo. The dog laid down next its master. It knew that its beloved friend was no longer with it. Cirrin sensed the grief and pain that the dog was feeling. He tried to help, but was fiercely rebuffed by Theo.

"What do you need from me, Beloved" Cirrin asked as he hovered over the dispondent dog.

"I need to follow my master." Theo whimpered softly without raising his head.

"You can find another to love, Theo." Cirrin tried to comfort his charge.

"I am here to protect you." Cirrin replied.

"Until all Hope is gone." Theo finished Cirrin pledge for him. "Then you will take me home. I heard your companion's pledge to my beloved master."

"Cirrin." Theo said softly. "My beloved Master is gone. For me all hope is gone. I want to go home. I want to follow Liam."

"I have only had to do this when death is eminent." Cirrin's eyes began to water.

"Theo." Cirrin recited his ancient pact to the trembling dog. "I am your Guardian Angel. I am here to protect you. And when all Hope fails, I am to take you Home."

There was a bright flash of light. Neither saw or felt the the violent seizures that overcame the dog's empty shell. Cirrin and Theo found themselves at the Rainbow Bridge.

"You have been claimed as a Beloved One." Cirrin replied. "The fact that you died after your human causes a bit of a wrinkle, but your Human sealed your fate."

Theo looked up and saw his beloved human appear at the foot of the Rainbow Bridge. Theo looked at Cirrin.

"Thank you friend." Theo sighed as he felt his heart's burden lift. "My life was always his."

"And his was always yours." Cirrin replied sadly as he watched the two friends cross the Rainbow bridge.


Several thousand Guardian Angels hovered around a great heavenly fire. Once every cycle, they gathered and remembered those who they could not protect. Delphina and Cirrin hovered next to each other. Delphina placed her hand on Cirrin's shoulder and then she descended to edge of the great fiery urn. She pulled one of her angelic feathers from her wing. She placed a kiss on this feather and then she tossed it into the fire.

"For Liam." Delphina wept. "He was a great and noble creature. I will not forget him."

Cirrin realized the meaning of the ceremony. The Guardian Angels were mourning their failures to protect. By saying they would never forget, they were placing the name of their charges into immortality for a creature of God lasts for all eternity. Cirrin noticed that the feather that Delphina removed did not automatically grow back. This was the price. For every human that they thought they had failed, each Guardian Angel gave one of their feathers. Once those feathers were gone, they would be stripped of their True Purpose.

Cirrin floated down to the edge of the great fiery urn. He looked at all the faces of the other Guardian Angels. He pulled one of his feathers from his right wing and cast it into the fiery urn.

"For Theo." Cirrin wept as he cast his feather into the flame. "He was a great and noble creature. I will not forget him."

Labels: Angels of the Rainbow Bridge, Liam and Theo

Watch the Ginger Cat on the Countertop

The rest of this commercial is pretty much crap. But if you watch for the Ginger Cat on the counter top, then you get to see a cat being a cat.

A very distracted Ginger Cat has found something utterly fascinating at the bottom of a coffee cup. It happens at the 0:08 second mark.

Today Is Magoo's First Birthday at the Bridge 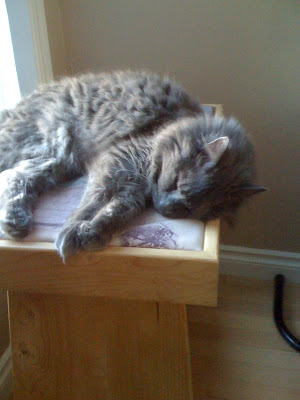 Today would have been Magoo's 15th purrthday. But he is at the Bridge instead of being here with us to celebrate. It has been almost eleven months since he suddenly left us.

As anyone who has lost a beloved pet, friend and companion, it is always the firsts after their passing that are the hardest; The First Christmas, the First Birthday, The First Anniversary of their passing.

You have a party with your furriends at the Bridge, Magoo. Run and play and wrestle to your heart's content.


Pee Ess: In a glimmer of hope, I came across the new comic for everyone's favourite youtube cat - Simon's Cat. Go have a good laugh, Magoo would have liked that. Thanks to Jasper McKitten Cat for the link.
Posted by Magoo, Smudge, Bella & Dolce at 3/04/2011 12:03:00 PM 11 comments: